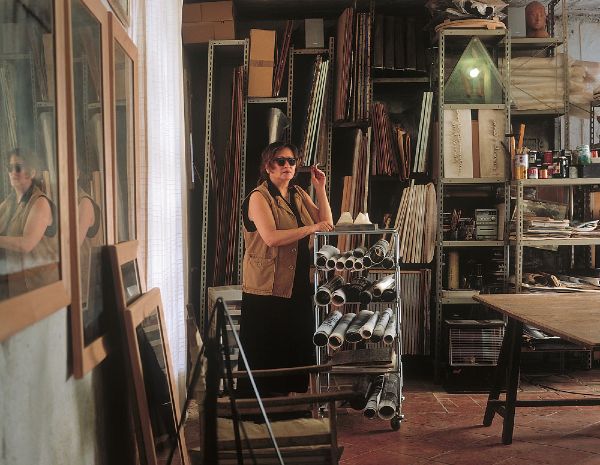 Evelien La Sud was born in 1950 in Holland , by Indonesian mother and Dutch father.

She grew up in the heart of Holland, nearby the city of Otterlo, by one of the entrances to the marvellous Kröller-Müller Museum.
Evelien drove around on her bicycle and felt at home in the forest, in the heather plains, familiar with the quicksand and the moor of the park. She often visited the museum created by Helene Kröller-Müller and designed by Henry van de Velde, where she carefully observed the paintings by Vincent Van Gogh; she also saw works by Georges Seurat, Auguste Rodin, Pablo Picasso, Fernand Le’ger, Piet Mondriaan, Brancusi, Alberto Giacometti, Marino Marini, and large African and Oceanic sculptures.

As of 1961 Evelien witnessed the arrival of numerous sculptures in the park around the Kröller-Müller Museum, by artists as Henry Moore, Barbara Heptworth, Richard Serra, Jean Debuffet and Claes Oldenburg. This felicitous merger between the art of Mankind and nature, and the discovery of clay, a moldable material found on the banks of the Rhine river, was influence her chosen path in life and art.

She studied at the Epsom and Ewell School of Art in England, where she learnt to throw porcelain, a very difficult material because, as Evelien puts it, “it is fluid like water” and at the Kunst Akademie St.Joost in Breda, Holland, where she experimented with new materials as polyester and Perspex.

In 1968 she moved to Milan to attend the Fine Arts Academy, where she studied figurative sculpture with the master Francesco Messina. She held her first individual exhibitions at the Angolare gallery, in Bologna, Modena and in various other cities.

This was a period that brought with it a transformation of the sense of the world and the reality in which we live, and in which we make our experiences. One looked to the East, sought for new forms of expression, paying more attention to individuality and singularity, through anti-authoritarian gestures, one searched for styles that expressed a break.
The desire for change was expressed through demonstrations, discussions, political activities, the taking of stands, self-awareness, by facing new thoughts and feelings.

In the late Seventies Evelien found herself in the Tuscan countryside, to understand nature, both as a system of ideas and as a historical condition. She lived without certainties, without a definitive project, emphasizing the ambiguity and contradiction of rationality, to lend a meaning, even if transitory, to the chaos of life itself. In 1978 and 1979 another two children were born; Evelien saw this experience as a performance, in a country house in a community in Mugello;
the old midwife Vieri remarked that she had never seen a woman giving birth who looked so much like the Mona Lisa.
A mysterious impulse, in which the sense of the eternity of the flow.

In 1980 she found an abandoned ruin; Evelien perceived the spatial condition fixed in timeless instant. Looking at the landscape, she fine-tuned her eye to doubt, to a methodical uncertainty, oscillating without stable structure; envisaging the numerous prospects, viewpoints, letting herself be carried away by the forces surrounding her, simply to exist with out effort.
Today that place has an identity. It is a large sculpture in perennial movement and transformation, that just like an oak, continues to grow, making one perceive and almost see the lymph that runs, rising into the leaves and spreading into the sun, in the form of oxygen.

She created installations with sheet iron, valorizing the essence of the material, polished and treated with beeswax, installations with coal and ink, mixed and stored in glass bottles with the letters of the alphabet impressed on them to indicate the conventional significance we attribute to signs of writing that otherwise lack value as such, as graphical signs, bringing to mind Socrates who had opposed the use of the written language, as it would have made people abandon the exercise of memory, of oral transmission and the imagination that is naturally stimulated by this activity.
She sewed tunic from paper and silk, printing passages in ancient Greek an the inside, passage taken from Euripides” Medea, that could only be read from inside, when one is able to wear, to understand, to enter the female path, observing its weaknesses and strengths in the relation ship with the man.
In 1982 she was enthused by book “The Tao of Physics” by Fritjof Capra. In the time it takes to cover a space, there is no arrest, the directions are mere instruments; the point of reference, the fifth cardinal point or axis is the center, that promotes the directions, can be everywhere and nowhere, it is unlimited and infinite.

She used metal tubes, water pipes, to create the support for the infinite Calendar in paper, where the numbers from zero to one thousand and from one thousand to zero are impressed and placed one after the next. She chose for the work titled “Effects of the Wind on Earth”, many iron sheets supporting pairs of glass panes, with traces of sea-salt compressed between them, an installation that reproduced a landscape, witnessing the intensity of the wind and its effects on the land. She reused jute sacks, lace and tulle, goldfishes, water. Heidegger, commenting Vincent Van Gogh’s work “ a pair of shoes” from 1886, wrote: “In the dark orifice revealing the worn interior, one clearly perceives the fatigue of the paths trodden while working. The massive heaviness of the shoes is a concentration of the harsh and slow progress towards the ample and uniform furrows of the field, beaten by a hostile wind.
The leather is impregnated by the humidity and turgidity of the soil. Under the soles flow the solitude of country paths as evening falls. The shoes convey the silent call of the earth, its tacit gift of ripe crops and its obscure refusal during winter abandon.”

They emanate the silent fear for the safety of bread, the tacit joy of survival from need, the tremor of the annunciation of birth, the anguish of proximity of death. They belong to the earth, protected by the world of the farmwife”.

In 1989 she experimented with food, creating a kitchen garden "Horto", an experience that not only transcended intellectual thought but also sensorial perception, to reach the most secret of sanctuaries, the interior of the heart where there are no paths, places or destinations.
In her house one could hear the voice of Maria Callas, combined with the gentle sounds of the country.
Evelien was amused by a letter by Gioacchino Rossini, who wrote “eat and love, sing and digest: these are in truth the four acts of this comic opera that is life, and that fades like the foam of a champagne bottle. Whoever lets it escape without having enjoyed it, in a madman”.

In the 90's she participated in a number of group shows in public venues.

1995 "9 ninfee e 64 sfere di cristallo" Temporary Installation for the fountain of Jupiter, Park of the the Villa Demidof, curated by Sandra Landi, Pratolino.

1997 intervention by Evelien La Sud at the Fine Arts Academy of Florence, Cenacolo Hall. Within the context of the Art History cours held by professor Maria Giuliana Videtta.

After the performance on the Merse river, where Evelien abandoned 4 terracotta vases with the wind rose in copper to the current, she was fascinated by the imprint that is formed in water. Images she found a workshop that craft end glass, and this as her new material.
She began to work with glass as if it were clay, getting familiar with the material and realizing “water imprints” for the Primo Conti Foundation in Florence. She created the work “nine nymphs and sixty-four drops of glass” for the Jupiter fountain in Pratolino. Since then, glass has been her preferred material. For a hundred days Evelien , on getting up in the morning , faced one of the four cardinal points, kneeling in that direction and imprinting her hand as a cipher on paper.

She resumed painting, as an authentic gesture, beginning with “The infiltration for your love”, blue paintings where the numerous layers of oil in various shades of blue allow a glimpse of blurred outlines, corporal visions, shoes and glasses that the artist lends charm on the canvas. In that period she read “Letter to a young poet” by Rainer M.Rilke. On each painting she wrote passages from the book she was reading in that moment . She painted tunics, applying parts of untreated canvas to cardboard, and working with white and silver oil and the imprint of precious sleeves and lapels. This series of paintings carry a written comment on the canvas, namely I love the valiant, from “Thus spoke Zarathustra” by Friedrich Nietzsche. She painted “gardens” and “where does it lead” paintings in mixed media an cardboard, covered by pages from telephone catalogues. The many, thin layers of color are superimposed without losing their transparency, precious gold and silver suggest the outlines of a carefully crafted, fascinating threshold towards an unknown dimension. The last painting are linked to the universe, to comic landscapes, to non-corporeality of Man, that become pure energy, the painting depict the evolution of the human society.

2001 “Sindrome d'oriente” at the Public Palace of Siena, Fosco Maraini, Evelien La Sud and Marco Bagnoli, curated by Jade Vlietstra and Mauro Civai.
The exhibition “Sindrome d'orente” is a call to gain awareness of the source, the origin of the mind, it reveals the profound relationships that link Medieval art to contemporary art in terms of essential orientations.

2003 Sindrome d'oriente II Fosco Maraini, Mimmo Paladino, Daniele Lombardi and Jaume Plensa at the Mudima Foundation, Milan
Evelien La Sud installation “Mutamento” consists of sixty-four glass slabs in whic sentences summarizing the sixty-four signs of the Chinese book of change, “I Ching”, are impressed. The glass slabs are inserted in four metal structures and can rotate on them selves.
The installation “Mutamento” casts light on the fact that what acts in movement is the instant-point, in a space of potentials and possibilities, with results that are different every time, with their own probability in states of superimposition.

2005 Il Mutamento is presented in Genoa, in the CELSO/Dipartimento di Studi Asiatici- Archivio Arti Contemporanee, organised by La Bertesca-Masnata and Kaiser Art. The exhibits comprise the work “Mutation", “Magic turtels” a work in ceramic with 4 large turtle shells, ancestral symbol for good fortune in the Oriental culture, used for divination precisely in the practice of the Chinese I Ching (of change). 40 small shoes on glass brics: the work consists of 4 triangles, arranged according to the Pythagorean formula 1+2+3+4=10 magic number. The shoes in the 4 triangles, in their turn, point of towards the four cardinal points, to indicate an open path.

2005 the one-man show in the gallery La Bertesca in Genoa she exhibits installations in crystal, Il giardino dei semplici e and the simple and pure work “Impronte d'acqua” that emanates the power possessed by air and water.

When I asked her whether she considers it important to distinguish the work of a female artist from the work of a male one, Evelien La Sud answered “Yes, in my opinion it is essential, it is not a matter of habit or costume, it is just something interior, a different eye. Also the relationship with one’s body changes totally when one’s body can be the vehicle of a new life. And since I love differences and believe we should arrive at a society where differences can coexist, all of them maintaining their own identity, I think it is essential to underscore the differences.

Evelien La Sud died of leukemia in 2006, in Siena.
Next
Previous